Click on the image above to view the trailer for Far East of Eden. 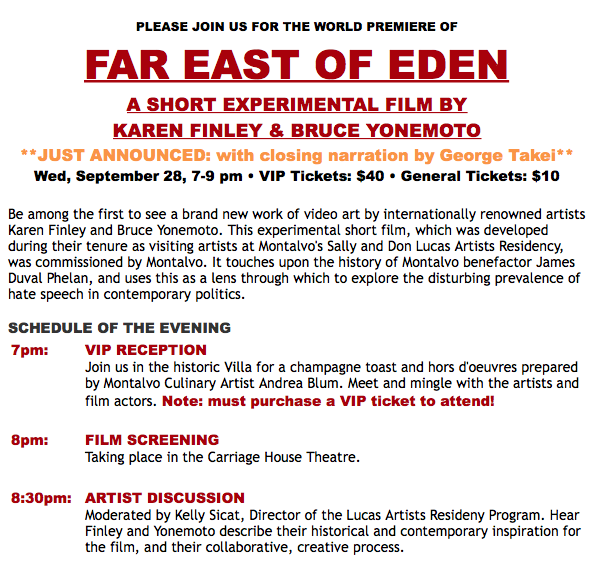 SARATOGA, Calif. — Montalvo Arts Center is pleased to announce that on Wednesday, September 28, 2016 it will present the world premiere of an experimental short film by internationally recognized artists Karen Finley and Bruce Yonemoto: Far East of Eden. The work, which was developed by Finley and Yonemoto during their tenure as visiting artists at Montalvo's Sally and Don Lucas Artists Residency earlier this year, was commissioned by Montalvo. It uses a dark chapter of California history as a lens through which to explore the disturbing prevalence of hate speech in contemporary politics and its potential dangerous consequences. The screening will take place at 8pm in Montalvo’s Carriage House Theatre and will include a panel discussion with the artists (tickets: $10). A VIP reception featuring wine, hors d'oeuvres, and a chance to mingle with film actors and project sponsors will precede the screening at 7pm (tickets: $40, include access to the screening and discussion).

“For over 30 years I have collaborated with contemporary artists such as Mike Kelley, Spalding Gray, Ron Vawter, and Mary Woronov to create media works that express the essence of their oeuvre,” said Yonemoto. “For me, Far East of Eden is a dream collaboration that captures on film the spirit of the extraordinary artist Karen Finley.”

“Working with Bruce is a natural development,” said Finley. “As colleagues we have consulted with each other for many years. There are numerous intersections in our work that provide an anchor for our collaboration. Together, we have created a film that brings together the duality of the humor and the horror of the human condition in uncanny ways, and yet strives to be profound, tender, and kind.”

Far East of Eden draws on the story of Senator James Duval Phelan, three-time mayor of San Francisco and the first popularly elected California Senator. In 1912, Phelan built Villa Montalvo as his country estate in Saratoga, California. Villa Montalvo was Senator Phelan's favorite home and a center of artistic, political, and social life in Northern California. Upon his death in 1930, Phelan bequeathed the Villa and surrounding property as a public park, asking that they be used “as far as possible for the development of art, literature, music, and architecture by promising students.” Decades later, this would become Montalvo Arts Center.

During his political career, Phelan was an outspoken supporter of various anti-immigrant policies, including the Chinese Exclusion Act of 1882 and the Immigration Act of 1924. While researching Montalvo as the site for a new project, Finley and Yonemoto were struck by Phelan’s anti-Asian sentiments, especially as expressed in his essay The Japanese Evil in California. Noting a disturbing parallel between Senator Phelan’s nativist views and the ethnic and religious intolerance that has gained currency in our contemporary political discourse—including calls for walled borders, forced removals of minorities, and military assisted deportation—the artists were inspired to utilize the events of yesterday to examine the policies of today and affect change for tomorrow.

“Senator Phelan’s legacy is complex,” said Angela McConnell, Montalvo’s Executive Director. “In addition to his politics, he worked passionately to encourage the arts in California. His bequest is the reason that Montalvo exists today and is able to support topical work by artists like Finley and Yonemoto—fulfilling a mission that is in keeping with the best and most beneficent of the Senator’s ideals.”

“For Yonemoto, the subject of racism addressed in Far East of Eden has a deeply personal resonance,” said Kelly Sicat, Director of Montalvo’s Lucas Artists Residency. “Born and raised in Santa Clara County, Yonemoto's family experienced first-hand discrimination and forced internment by the US government during the Second World War. Together with Finley's provocative performance work, tirelessly committed to addressing issues of injustice, intolerance, and persecution, the collaborators serve together as social recorders of our contemporary history.”

Sicat continued: “Far East of Eden illustrates the ability of a contemporary works of art to ask difficult questions and reflect on historical issues, all in the hope of starting necessary conversations. Montalvo is proud to support artists such as Karen and Bruce in their pursuit of human justice.”

Far East of Eden is one of two works of art commissioned by Montalvo in 2016 that interrogate issues of inclusion and exclusion in Silicon Valley. The other is Rolling Counterpoint, an installation by Japanese-born artist Taro Hattori. Inspired by the Japanese tradition of using tea houses as spaces for mediated discussion, Hattori will hold public conversations in Rolling Counterpoint through the fall and winter, addressing the specific history and current social environment of Silicon Valley, addressing issues of displacement. The piece is installed on Montalvo grounds and will have a roving counterpart that visits various locations throughout the Bay Area. A schedule of upcoming locations and dates will be released soon on montalvoarts.org.

Karen Finley is a New York-based artist whose raw and transgressive performances have long provoked controversy and debate. She has presented and performed her visual art, performances, and plays internationally including at Lincoln Center, Guthrie Theater, American Repertory Theatre, Institute of Contemporary Arts, Steppenwolf Theatre, and Theatre Bobino. Her artworks are in several collections and museums including the Pompidou in Paris and Museum of Contemporary Art, Los Angeles. She has been the recipient of numerous awards and accolades including a Guggenheim Fellowship, New York Foundation for the Art’s Fellowship, National Endowment for the Arts Fellowship, two Obies, and two Bessies.New York Times art critic Ben Brantley has praised her work saying “here’s no denying the genuine rage and pain behind her performance, nor her ability to find voices that reflect those feelings in disturbingly visceral ways.”

Bruce Yonemoto has developed a body of work that positions itself within the overlapping intersections of art and commerce, of the gallery world and the cinema screen. As a "hyphenated American" (Japanese-American), he has a special interest in literature (anthropological, fictional, travel) that explores areas where people geographically and historically separated come into contact with each other and establish ongoing relations. These contact zones have been historically rife with coercion, radical inequality, and violent conflict. Yonemoto has been honored with numerous awards and grants from the National Endowment for the Arts, the American Film Institute, the Rockefeller Foundation, and the Maya Deren Award for Experimental Film and Video. Most recently, his solo installations, photographs, and sculptures have been featured in major one-person shows at the ICC in Tokyo, the ICA in Philadelphia, and the Kemper Museum in Kansas City. The Tate Modern in London will mount a retrospective of Yonemoto's work in 2017.

Montalvo Arts Center is a member-supported non-profit institution, whose mission is to create and present art of all types, nurture artists, and use its historic buildings and grounds in innovative ways that engage people in the creative process. Located in Silicon Valley's Saratoga Hills, Montalvo occupies a Mediterranean-style Villa, built in 1912 by Senator James Duval Phelan and surrounded by 175 stunning acres. Senator Phelan bequeathed the Villa and grounds to the people of California for the encouragement of art, music, literature, and architecture, a mandate Montalvo has carried forward ever since its founding. The grounds include the campus of the Sally and Don Lucas Artists Residency Program (LAP), designed to offer artists from a range of disciplines an environment conducive to individual and collaborative creative practice. Geared toward artists with the potential to become major voices in the next generation of creative thinkers, the LAP has earned international recognition as a model of curatorial practice supporting the development of new and challenging contemporary work. For more information about Montalvo Arts Center and its programs, the public can call (408) 961-5858 or visit montalvoarts.org