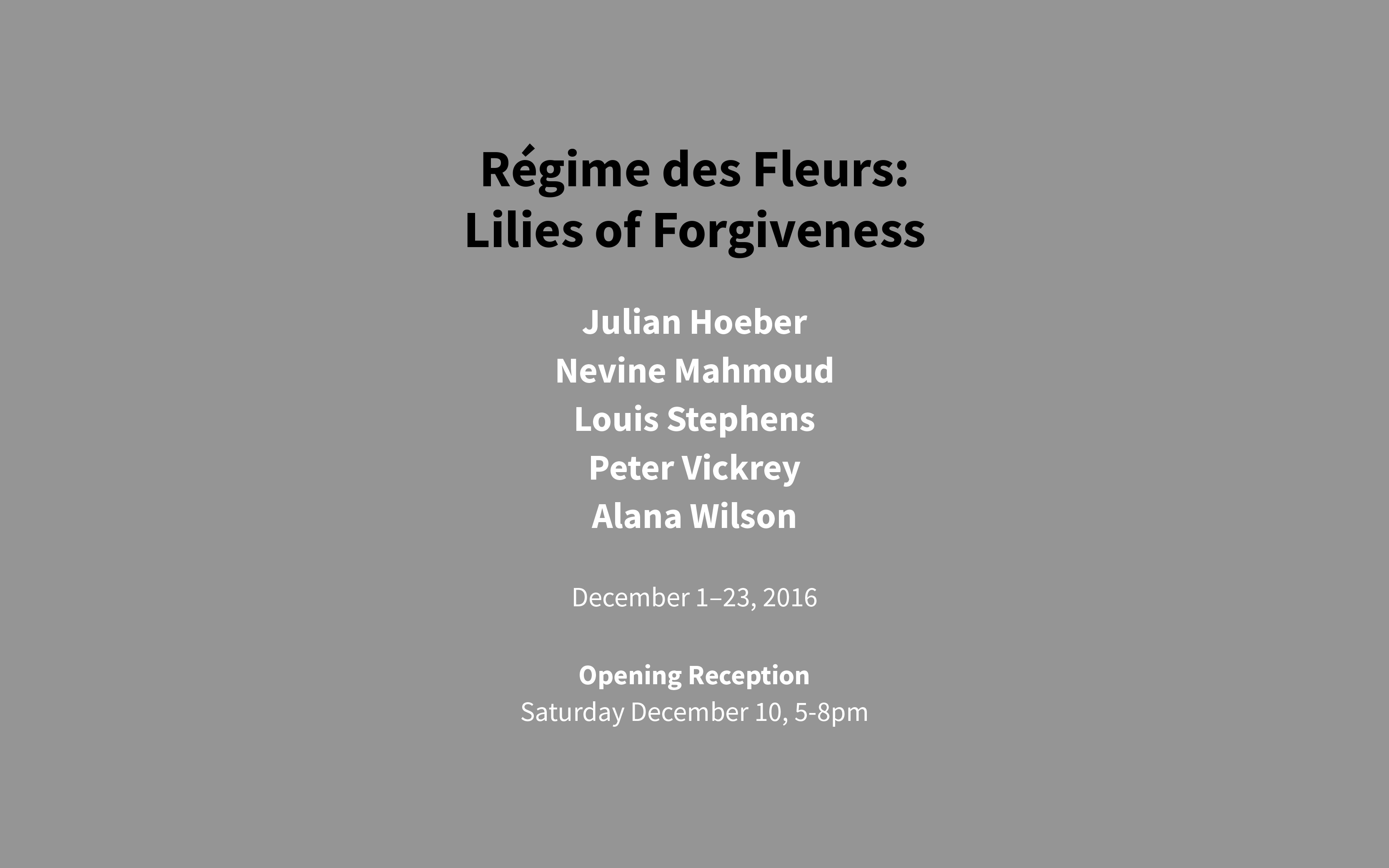 "Each lily of forgiveness offers all the world the silent miracle of love.” -Jesus Christ as channeled by Helen Schucman from A Course In Miracles Workbook, p.473. Although Christian in statement, the Course deals with universal spiritual themes. It emphasizes that it is but one version of the universal curriculum. There are many others, this one differing from them only in form.

Following the controversial election of businessman and public personality Donald Trump to the presidency of the United States of America and in advance of the highest festival in the Christian tradition on December 25th, believed to be the 2016th anniversary of the birth of Jesus of Nazareth,  Lilies of Forgiveness is a meditation on transcendence. In the European vocabulary of symbols, the lily has signified the purity and radiance of grace since the Middle Ages- figuring regularly in illuminations and paintings of The Annunciation and The Resurrection. For Lilies of Forgiveness,  Régime des Fleurs commissioned objects and a soundscape from artists and placed these works along with arranged fresh flora within the gallery to a create a space which evokes the convergence of immateriality and visceral humanity.

One of Julian Hoeber’s glass and aluminum tables hold a set of Vessels by Alana Wilson. Wilson’s studio practice incorporates extensive research and experimental glazing to achieve textured and decaying surfaces. Specific ingredients are added to her glazes that encourage pitting, bubbling and a maturing of texture within the firing.

Peter Vickery’s Segmented Columns and his Hanging Vessel seem at first glance quite brutal, as they are made of concrete and steel wires. Shells and lighted crystals are embedded in the pieces, radiating light and providing softness to an otherwise brut object.

Placed on pedestals, Nevine Mahmoud’s Angle of Repose I and II are lilies carved of alabaster. Light diffused through the elegant pieces produce a shadow interplay and heightens the transcendent drama of the installation by Règime des Fleurs.

A soundscape, Lillies of Forgiveness by Louis Stephens embraces the installation with sounds meant to evoke thoughtful calm. His soundscape along with the installation of wonderfully scented lilies arranged by Règime des Fleurs affect transcendence for their concern through engaging the senses of scent and sound. All works were made by the artists in 2016.

*Règime des Fleurs is a Los Angeles based luxury brand founded in 2013 by Alia Raza and Ezra Woods.

C. Nichols Project is delighted to work with Raza and Woods on Lilies of Forgiveness and we thank them profoundly for the exhibition.