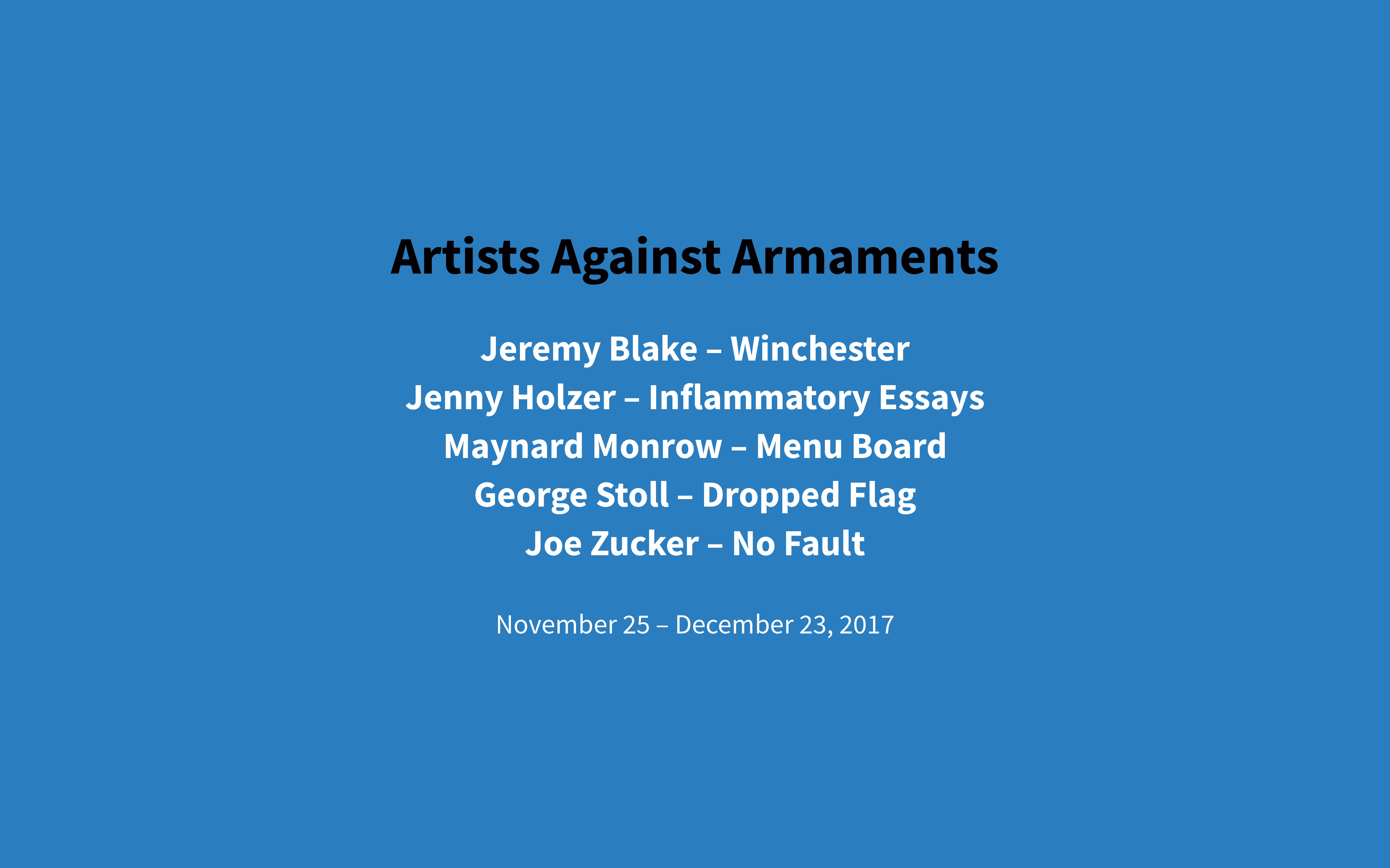 Guns with automatic capabilities have killed upwards of 1600 people and wounded thousands more during mass shootings since the horrible occasion of the Sandy Hook murder of 26 in 2012. Advance five years later and it does not seem as though we are making any progress towards a solution to this madly upward-spiraling trend. As of November 2017, over 33,000 are dead and over 81,000 seriously wounded. It is in this current atmosphere, that C. Nichols Projects presents Artists Against Armaments, pieces from five artists dissecting the American phenomenon of violence using automatic weapons.

Jeremy Blake called his films “time-based paintings.” Winchester, made in 2002 as the first part of Jeremy Blake’s Winchester Trilogy, explores, not only the obvious violence of guns, but that of psychic violence impressed on gun manufacturers themselves. According to Blake, “Winchester” is meant to provide a tour not only of the Winchester mansion (San Jose, CA), but also some of the more fearful chambers of Sarah Winchester’s mind. …My interest in the mansion is rooted in an understanding that the site is more than just a monument to one person’s eccentric fears-it is the tangible outcome of a pileup of social and historical narratives.”

Inflammatory Essays, (1978-82) by Jenny Holtzer are described as “a collection of 100-word texts that were printed on colored paper and posted throughout New York City. Like any manifesto, the voice in each essay urges and espouses a strong and particular ideology. By masking the author of the essays, Holzer allows the viewer to assess ideologies divorced from the personalities that propel them. With this series, Holzer invites the reader to consider the urgent necessity of social change, the possibility for manipulation of the public, and the conditions that attend revolution.”

A “Menu Board” from Maynard Monrow made in 2017 elevate common menu board signage to an uncommon reaction to current political climate. Monrow lives and works in New York. His work has been exhibited at numerous institutions and galleries including the Art and Culture Center, Hollywood, FL (2016); Booth Gallery, New York, NY (2016); Gavin Brown’s Enterprise, New York, NY (2015);and LAXArt’s L.A.P.D. Billboard Project.

Untitled(4th of July: dropped American flag #5- double), 2017 continues George Stoll’s exploration of the ephemerality of American values through the the object of the Flag of the United States of America. Each flag of the series is a bit more damaged, as if it were a repository for the fighting in USA that keeps activist gun- control law from passage.

Cannons of pirate ships morph into the carbines of tanks in No Fault,(1980) by Joe Zucker. For many years Joe Zucker has tested painting’s material boundaries using everything from cotton balls to rope. The how and what of his practice are always poetically and sometimes rather humorously intertwined. Subjects include what springs from his abiding fascinations: water (boats, fishing, pirates), birds, rudimentary building materials and hypothetical architectural and/or historical situations. Pirates play a sometimes genial role in Zucker’s fascinations, No Fault reflects a more sinister position coming about.