Shock of the Nude: Carolee Schneemann's retrospective featured in The New York Times 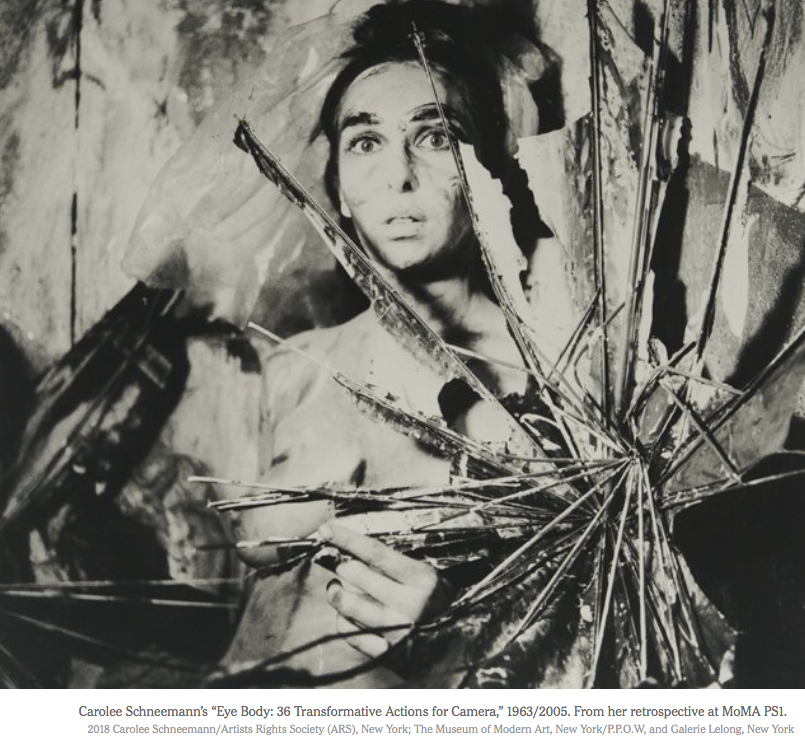 Some people in the art world say that #MeToo has gone too far. What modern misogynist will be yanked from museums next? Gauguin? Picasso? I say, sure, why not? Let’s set them aside for awhile, give them a rest, make room for what we never see, which means art by almost any woman you can name.

Carolee Schneemann is an artist I’d move right into the cleared-out spotlight, not just because she has star quality, which she does, or because she has majorly shaped art history, which she has. I’d put her there because, in a career of some 60 years, she’s been one of the most generous artists around: generous with her presence, her thinking, her formal and political risk-taking, and her embrace of embracing itself — across genres, genders and species.

You find evidence of all of this in “Carolee Schneemann: Kinetic Painting” at MoMA PS1, the artist’s first comprehensive career retrospective. The show, which comes from the Museum der Moderne Salzburg in Austria, has problems. It is, disorientingly, installed in reverse chronological order. This means you encounter not-always-strong recent work on the first floor, and the now-classic early pieces only later on the second.

Yet as a sprawling totality, it works. And it succeeds in clarifying the artist’s own long-range view of her career. Although she is best known for her innovative performance work, live and on film, the show supports an assertion she made long after much of that work had been done: “I consider myself a painter still and forever (no matter what ‘medium’).”

Born in Pennsylvania in 1939, Ms. Schneemann was the child of a country doctor. “There was always physicality around us,” she once said in an interview, “leaking, spilling out of boundaries, wounded farmers with bleeding limbs, hemorrhages, infections. No fantasy of the sanitized body in this household.” She latched onto painting, in a messy, expressionist form early, and went to Bard College in upstate New York to study it. But she ran into trouble there. She wanted to paint; her all-male teachers wanted her to pose. When she painted a nude self-portrait, she was accused of moral turpitude and expelled.

She enrolled at Columbia University, and continued to work in a ropy, churning gestural style that took something from Cezanne and body-conscious abstractionists like Gorky and de Kooning. In her paintings of the 1950s, landscapes and bodies look almost interchangeable. A nude portrait of her husband-to-be, the composer James Tenney (1934-2006), lying in bed with their pet cat, Kitch, could be mistaken for a tangle of tree limbs, or a garden blooming, or bleeding.

Ms. Schneemann had little use for Abstract Expressionism’s culture of angst. What interested her was the physical action in “action painting.” She took it seriously enough to slice into her canvases and layer them with collage material, and then move into assemblage (at one point she forged a mutually beneficial friendship with Joseph Cornell). For a while she used fire as a mark-making medium.

By the early 1960s, after she had converted a Manhattan commercial loft into a studio, her assemblages grew to the size of environments, in which she performed, her nude body smeared and streaked with paint, for a series of photographs titled “Eye Body: 36 Transformative Actions for Camera.” The performances, which included live snakes, shattered mirrors, and cow skulls as props, suggested archaic rituals, violence-tinged but executed with surrealist wit.

It was a short, logical step from the studio into a theater. Ms. Schneemann made the transition as a founding member, along with dancer-choreographers like Deborah Hay and Yvonne Rainer, of Judson Dance Theater, a company that was changing American dance. In the Judson aesthetic, everyday actions – walking, running, lovemaking – assumed expressive dimensions.

Most of her theater work, documented in photographs or on film, exists only as ghost traces in the show, organized by Sabine Breitwieser, of the Museum der Moderne Salzburg, and Branden W. Joseph, a professor at Columbia University, along with Erica Papernik-Shimizu and Oliver Shultz of MoMA PS1. Yet some images, such as shots of the solo piece “Interior Scroll,” still startle. For the 1975 performance, the artist stood alone on a table, nude, posing like a studio model, and reading aloud from a book of her collected writings, “Cezanne, She Was A Great Painter,” which includes a litany of misogynistic reactions a female artist could expect to encounter in her career: 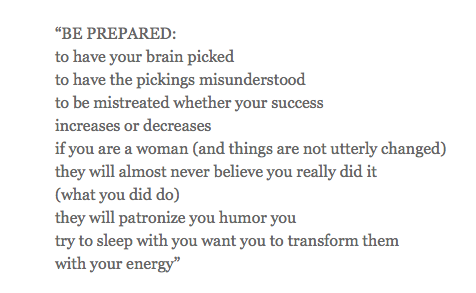 She then put the book down and slowly extracted a narrow strip of folded typewritten paper from her vagina, reading the text on the scroll as it emerged. It included, among other things, a direct appeal to a film historian — female, as it happened — who had been dismissive of her work, as a sizeable swath of the art world was at that time.

Made in increments between 1964 and 1967, “Fuses” is a beautiful, complex work, among Ms. Schneemann’s most moving achievements. Like much of her art, it bridges interior and exterior worlds: we see the lovers in their darkened bedroom and we see a rural landscape in changing seasons beyond the window. It’s hard to follow: organically, it’s here, then it’s there. But the flow, metaphoric and visual, is rich. And like so much of her art, the dynamic is fundamentally collaborative, shared.

The loving-making, which is continuous, was shot by both partners passing small portable cameras back and forth between them. Most radically, the entire film is framed as if seen through the eyes of a third, observant, unjudging party, the female cat, Kitch, the first of several “muse-cats” that Ms. Schneemann has bonded with, and included in her art, over the years.

For me, their inclusion is defining, and the artist is well aware of what she’s gained from it. In 1981, she wrote about life-lessons, which in her case are invariably art lessons, learned from her fellow-creatures: “risk and self-confidence linked in physical action; unrestrained tenderness and demonstrative love and affection; they have instructed as to the transitions between visible and invisible; they have clarified the motion between domestic worlds and a scale of landscape inaccessible to humans; they have heightened my concentration, patience; taught me the ability to sit in total stillness and react instantaneously.”

Another lesson-giver, Mohandas K. Gandhi, is often (though uncertainly) credited with saying that we can judge the moral progress of a culture by observing how it relates to, and treats, animals, an ethic that effectively consigns Western humanism, with its idea of man as the measure of all things, to the dust. I suspect that Ms. Schneemann might agree with his view, which offers yet another explanation of why she continues to stand in “a zone corresponding to the art world’s blind-spot” as she has put it, which gives an excellent reason to give her embracive, karmically corrective art a permanent place on center-stage.

This article has been condensed, for the full article follow the link below.
https://www.nytimes.com/2018/02/01/arts/design/carolee-schneemann-moma-ps1-art-performance.html

C. Nichols Project is pleased to have in the gallery a set of prints by Carolee Schneemann from 1979.
They are in beautiful condition and we would be delighted to show them to you. 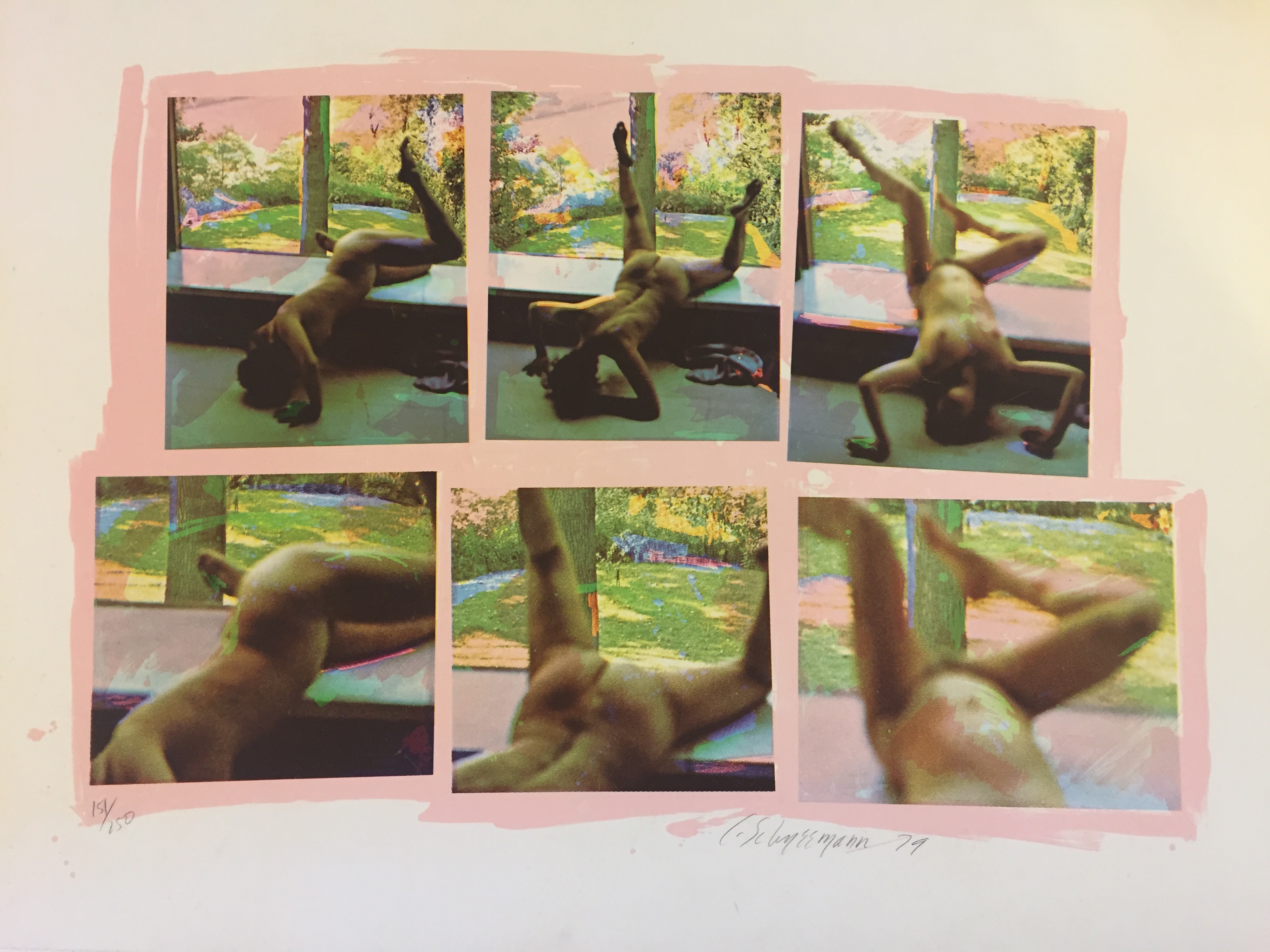 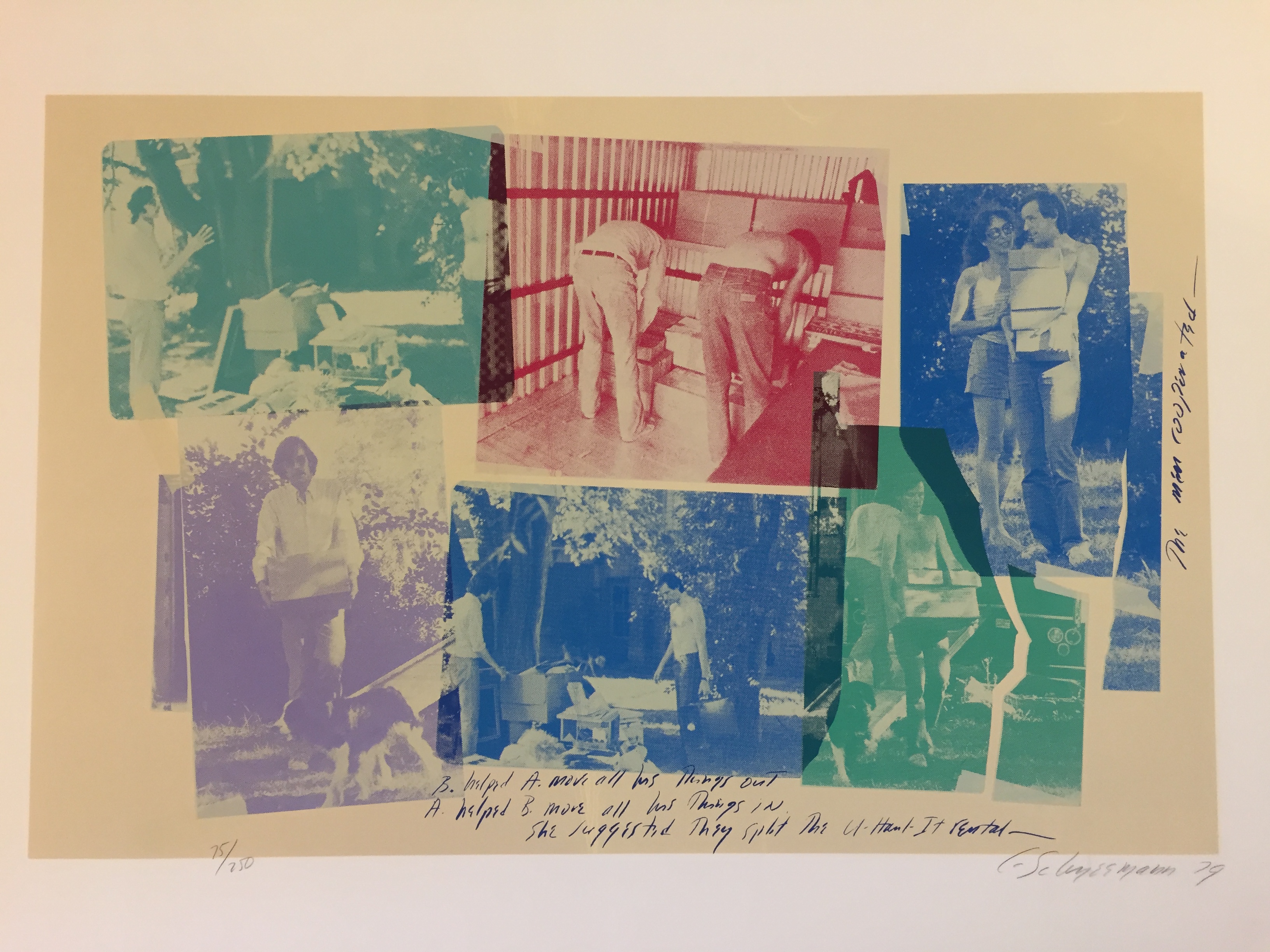