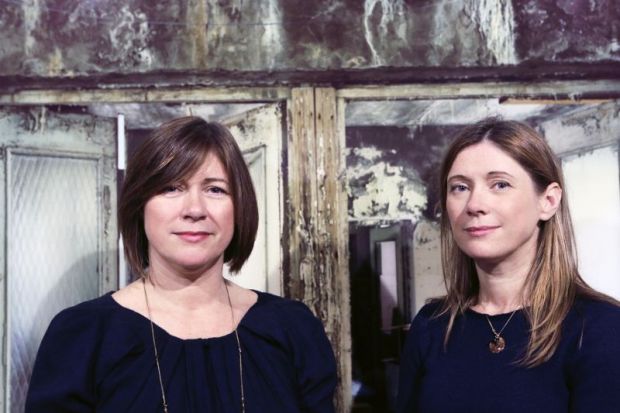 A pair of identical twins have been appointed to a joint professorship in Newcastle University's fine art department.

Jane and Louise Wilson were born in Newcastle and Jane studied at what was then Newcastle Polytechnic, while Louise went to the Duncan of Jordanstone College of Art and Design (now part of the University of Dundee). Yet they worked together on what the latter described as “very staged and large photographic installation pieces”, some of which depicted them trying to murder each other, and decided to submit identical portfolios to their 1989 degree shows. Their institutions had to face up to the unusual challenge of collaborative assessment.

The Wilsons went on to do postgraduate degrees at what is now Goldsmiths, University of London and have continued to collaborate ever since, relying on the kind of “healthy debate” that avoids the dangers of being either tiringly conflictual or boringly harmonious.

They specialise in large-scale photographic, video and installation work often built around places with dark and complex histories such as the Stasi archives in Berlin, the former women’s peace camp at Greenham Common, the headquarters of the Russian space programme, bomb-testing sites and the Houses of Parliament.

In 2003, they returned to their local area for a project called A Free and Anonymous Monument, looking at an idealistic piece of public art from 1969 called the Apollo Pavilion, which has been largely neglected and covered in graffiti. Sealander, their latest exhibition, of photographs of bunkers erected by Hitler during the Second World War, recently closed at the J. Paul Getty Museum in Los Angeles.

In parallel with this, the sisters have had a series of teaching roles, briefly together at Goldsmiths in the 1990s, where they tended to work alternate weeks, although in recent times Jane has been based at the Royal College of Art and Louise at Northumbria University. They were nominated for the Turner Prize in 1999. Only a handful of the dozens of nominees since 1984 have been artistic duos (and only the Chapman brothers have been siblings). It seems highly likely that their new joint professorship is a first for identical twins.

The position is defined as “practice-based”, so the Wilsons will continue to create artwork in their studio in London, drawing on their travels and a forthcoming residency in South Korea, although their next project will incorporate research in the area around Newcastle and will be shown there in 2018. Louise is “looking forward to opportunities to work cross-departmentally” with colleagues in fields such as architecture and science. But they will also be “part of the teaching team, the seminar programme, tutorials”, and she said that “there will be points when we come together and give a presentation together”.

Working together as artists, she added, often involves challenging each other and “provoking the questions we can’t generate ourselves…We are independent in terms of how we teach and think.” It remains to be seen whether their different perspectives prove stimulating or confusing for their students.

< Summer of Love opening at Wilding Cran Gallery Tonight! An Arts District with no artists: >