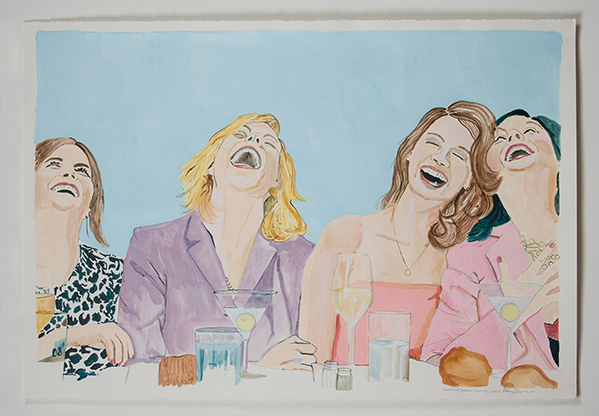 Anticipation is an undercurrent running through recent work by New York-based artist Rory Devine -- anticipation and imminent loss, if not exactly dread. Two-dozen paintings on canvas and paper, plus one video showing only a fellow absent-mindedly riffing chords on an electric guitar, employ motifs both figurative and abstract, recognizable and allusive.

Devine’s art is determined to focus on present experience instead of promises of future reward, a point well-taken. Dour but not bleak, the work could still benefit from even greater immediacy of engagement.

A grinning portrait of a blond, bright-eyed young boy is easily identifiable as a childhood picture of Kurt Cobain, whose shotgun suicide 20 years later reverberated against the blissed-out promise of spiritual grace alluded to in Nirvana, his band’s name. Four laughing young women share a joke behind a table strewn with cocktail glasses, somewhat in the mode of a “Sex in the City” outing on the town, their moment of unison imbued with the sense that this shared levity will pass.

Both paintings are obviously based on photographs, neither of any special note. Stylistically descriptive, Devine’s flat-footed, illustrational paint-handling helpfully underscores their sense of the mundane. He brings the same quality of ordinariness to workmanlike paintings of lecture halls, both empty and full, where at least some routine enlightenment is promised if not delivered from the unseen lectern.

Even abstract paintings forgo their frequent association with the construction of new worlds. Empty promise radiates from a painting of 12 geometric sunburst patterns arranged in a grid, one of the show’s best works. The gilded, light-reflective halo implied by the golden background color can’t sanctify an image wryly dubbed “Untitled (Painting of the Year).”

In addition to his show, Devine, who operated TRI Gallery in Hollywood in the early 1990s, has also organized a related group show in an adjacent room. “Capture the Rapture” includes mostly small abstract paintings by Mary Heilmann, Robert Levine, Laura Owens and four other artists.